Nearly there on my latest creative project ...

A while ago, I gave you a little teaser as to my next creative project.... I am very nearly there now. Many of you guessed correctly that I was going to attempt my first mosaic. It has taken a while, but so far I am very pleased with the result. What do you think? 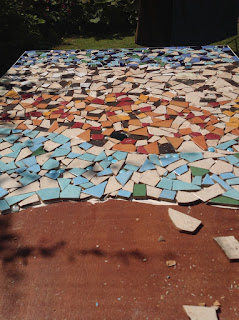 Part way through the tiling.
I decided to do 'Waves' of tonal colours rather than a specific pattern. As Mr D said "random but in a pattern" 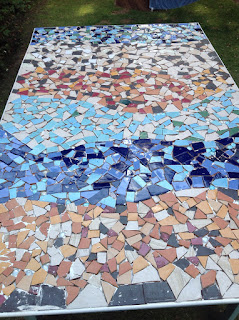 The tiling is finally complete, but I haven't grouted yet. I ran out of steam after all that smashing and careful placing. We reckon I spent about six hours on the tiling.

I decided to do a removable top which is then screwed on a frame to go over the top of the original table. The tiled table top will be very heavy. I then edged it with plastic tile edging to give a neat finish.
The table has lasted us really well. We bought it from Argos about 15 years ago for a mere £99. It has been painted regularly to keep it looking smart and would no doubt have lasted us many more years had one of my sons friends not decided it would be a good idea to stand on the table causing it to crack. Hey ho, collateral damage of leaving my teenagers home alone when Mr D and I went away for a few days!
Anyway, I had wanted to do a mosaic since visiting the Gaudi park in Barcelona 8 years ago.
I'll post a photo of the finished table when I have grouted it all - I'm thinking the grouting may take a while too!