On Saturday, Mr D and I were going about our business doing some errands. The weather was wet and windy but had calmed a little. We were chatting about this and that in the car and, having just pulled away from some temporary traffic lights, we were in a line of slow moving cars. All of a sudden, I heard the screech of breaks and tyres on wet road before an almighty crash as the car behind slammed into the back of us, shunting us into the car in front! 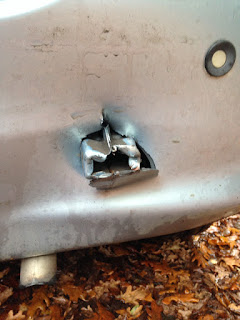 The rear bumper has been shoved so hard that these metal rods are now protruding through each side! 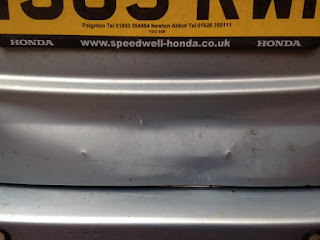 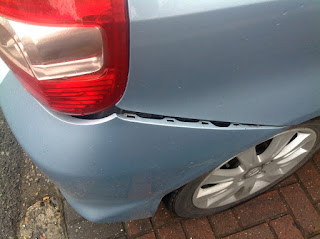 The side sections of the rear  bumper have been twisted 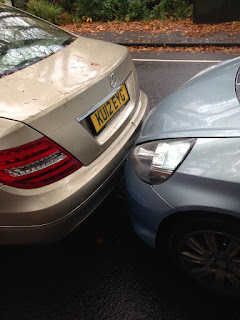 This is the rear of the car in front now!

Our poor car looks very miserable indeed, both front and back are damaged and after describing the damage to our insurers, they feel the car may well be a right off. At least the chap behind is insured so it's all being processed now, but it wasn't a pleasant experience. Mr D had a very sore neck and my upper back was sore, but we took some ibuprofen and applied various heat pads and felt a bit better, if still stiff the following day. Mind you today I actually feel worse so I might get the doctor to check it over in my appointment tomorrow.  We will be offered massage or physio via the insurers if we need it. The poor chap in front had his elderly parents in the car with him and they looked rather shocked, but no one was seriously hurt. Mr D and I were relieved that we had just dropped our youngest back at home and that we didn't have Jet in the boot - he doesn't need any more psychological trauma!

It will be irritating if we have to find another car. We have three at the moment, having brought mum's car back and we had been planning on scrapping our big 7 seater as we don't really need it any more. We'd been keeping it to ferry stuff back from Mum's house as its like a van when you take the seats out. I love that car - very comfortable, great visibility and such a workhorse, BUT the gear stick is held together with parcel tape and the window trims are all falling off; it's covered in scratches and the glove compartment won't shut anymore, so hangs open like a permanently gaping mouth! I think we might have to keep the big car until it's MOT/insurance runs out and Mr D will have to use my Mum's car for getting to and fro from work. At least we have options, which many people might not.
Posted by Happeninguponhappiness at 08:36