Whilst we have felt it necessary to redecorate every room, as we couldn't cope with the colour schemes, we have been very fortunate in many respects with this house...

The bathroom suite is white and perfectly fine, so doesn't need replacing
The carpet up the stairs and throughout the first floor rooms was quite new, plain cream and in good condition. I just hired a carpet cleaner one day and gave it the once over.
The kitchen units were absolutely fine as were the utility room ones, so no need for expensive refits
The windows are all double glazed. Some of the hinges have worn out and one of the sealed units has 'blown' but a much less pricey job to repair than replace all new

All of these things have meant that we have been able to completely change the feel of the house without spending a lot of money. Everything we have needed, except for the two rugs, has been sourced second hand or passed on by people who no longer needed the item. I reckon we could easily have spent £50,000 plus already if we'd had to do kitchens, carpets and bathrooms ...and just think of all the mess and chaos involved too!
I do have to think though that if the previous owners had just toned down the colour scheme BEFORE putting it on the market, they could have got quite a bit more for the house...but of course, I'm also pleased they didn't!!

The bathroom upstairs is a decent size and has a bath and separate shower enclosure. There is a heated towel rail and underfloor heating, although we have yet to make that work! The tiles and enamelware are white too. There was a large bathroom cabinet fitted into the recess above the toilet. It had a mirror attached to it originally, but with its positioning behind the toilet, that wasn't working for me! I was imagining that removing the mirror would destroy the cabinet door, but all it left was two little screw holes. I've covered them with a little wooden heart, which I have painted to match the medicine storage unit brought from our previous house. So, no money spent yet....well except for the tin of paint. 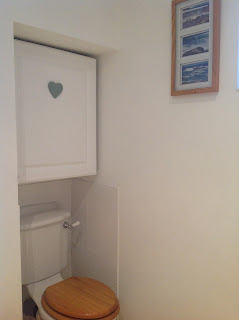 The walls were a combo of turquoise and caramel. That had to go. Out came the white again - four coats this time!
I scraped out and replaced the silicone around the window and sink; all of the woodwork was sanded and glossed and I whitened all of the grout with one of those sponge applicators  (a very tedious job, but it does make it all look a lot fresher) 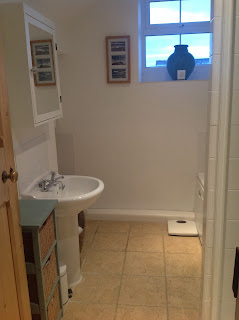 There had been a metal mirrored shelf unti with light above the sink, but I REALLY didn't like it. We had looked in a local bathroom shop for a new cupboard and found a lovely one...£200! Ikea had a cabinet of similar style and dimension for £60. We had an electrician to de commission the light and replace it with a shaver socket, which we put inside the new cabinet to keep things neat. It did mean cutting a whole in the back, but at £60, I didn't mind. 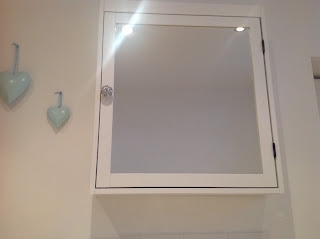 I added one of my lovely handles to each cabinet - bought in bulk as they were better value that way. 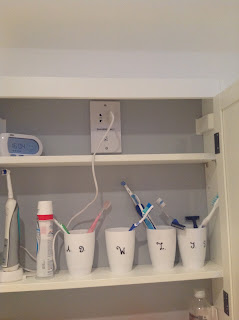 Inside the cabinet - it's slimline because its directly over the sink, but is perfect for storing all the toothbrush holders. I bought them very cheaply in a pound shop and my daughter labelled them with a permanent marker.

I don't know about you, but every toilet roll holder I have ever owned, has drooped! I decided to dispense with them altogether  this time and bought this rather natty number. It even stores spare loo rolls neatly 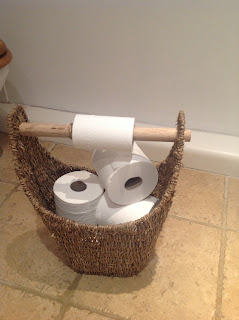 Who'd have thought a post about repainting a bathroom could be so long?!!