Once again, I have been busy making jams.

There is a very old blackcurrant bush in the garden which is smothered with bindweed and interspersed with nettles, but it bravely battled on and produced enough currants for me to make six jars of jam. Sadly it will be its last harvest as that entire bed will be dug up soon.

I have also made 10 jars of plum jam from the windfalls. I'm not sure which plum it is, but boy are they sweet! It didn't set the first time, so I had to faff around reboiling, but hopefully I'm there now. 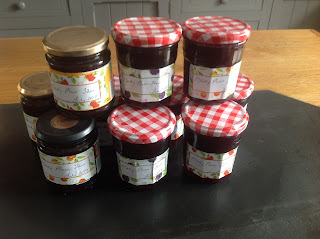 When we started the ground works for the extension, a very large rhubarb plant had to be removed, but bless the builders, they chopped off all the stalks for me first, knowing I'd want to make something from them. I froze half and made rhubarb and ginger jam with the rest. 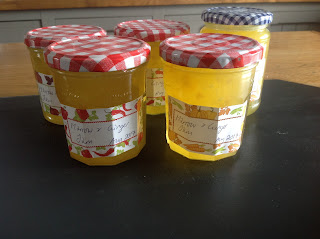 I really need to practice putting the labels on straight!

Today I have made marrow and ginger jam. Like everyone who grows courgettes, you always end up with the odd monster, so I thought I'd give it a go. I only made a small batch of 5 jars initially but after tasting, everyone judges it to be a success, so I might make another batch. I used a huge yellow courgette and because I didn't think it would set without, I added liquid pectin. It did take an age to boil to setting point, but we got there eventually!

I also made about 7 jars of cucumber relish. The slugs ate my cucumber plants but my sister-in-law had loads, so I said I'd try making a relish similar to the old Cubitt's relish for those who remember it. I haven't tasted it yet as I feel it will improve with time, but it looks good. It took my flipping ages finely chopping everything but I think the end result was worth the extra effort. 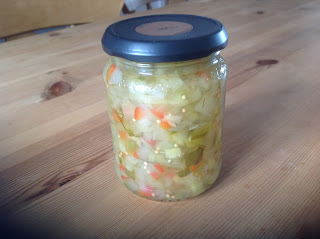 A photo from the reverse to show you the finely chopped vegetables, mustard seeds and dill

My next project will be a spicy summer squash chutney to be served with curry. Oh and the sloes will be ready soon for another batch of sloe gin. I might try a beetroot ketchup and I have lots of tomatoes to make tomato ketchup too. Blackberries will have to be foraged as well......still I have a large larder to store it all in now!
Posted by Happeninguponhappiness at 08:58