One of the reasons for moving was to start the process of becoming more self sufficient...mostly in fruit and veg, with the addition of eggs. When we bought the house, it came with a three acre plot. The plot isn't flat and can get very wet in places. It had previously been used to graze sheep, although they had also had pigs and turkeys on there too.

There was a fenced off area at the bottom of the field which was one huge bed of nettles. Now I know all about keeping nettles for butterflies, but this was totally excessive. Our neighbour helped by strimming. I then sprayed with glyphosate and then we membraned the whole area and covered it with scalpings, except for the site where the polytunnel would go which was left just membrane.

The builders put up the hoops - we didn't trust ourselves to get them level! 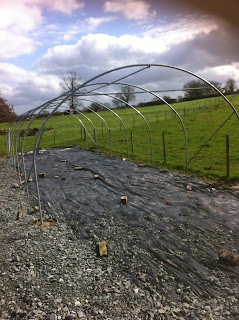 We then set about building a series of six raised beds from old scaffolding planks within the skeleton of a frame. An order of 15 tonnes of topsoil was delivered and barrowed into the beds 😓 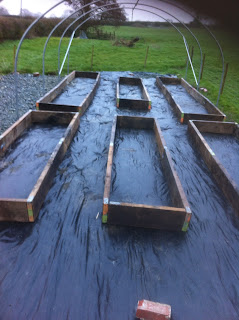 It took us weeks to build the beds and the frame. My brother had bought an identical tunnel, so every weekend we would build some more of his, then come to ours and build the same section. The instructions with the tunnel were good, but the concept stated on the front page, that "an extra pair of hands would be useful" was an extreme understatement!! They are a project that's for sure. If I ever did it again, I might cough up for the experts to build it for me!

Finally at the end of March we were ready to put on the super therm cover. Suddenly it felt huge! Mind you at 14 by 42ft, it is quite a size :) 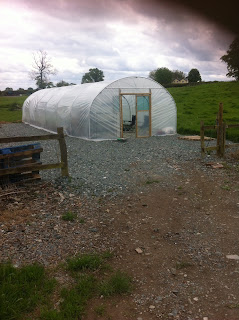 We added scalpings to the pathways. I set up a working corner with my potting bench and some staging and added a couple of picnic chairs. I had already grown a lot of seedlings in the utility room so I could start planting straight away. 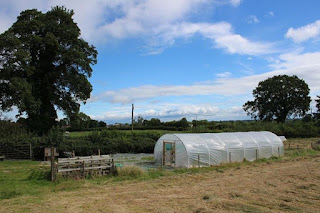 View from higher up the field. The area with pallet sides is a double compost bin. 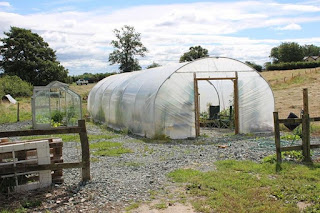 We moved the greenhouse from the garden to be next to it and the builders set me up with mains water - a godsend with a tunnel, especially as it's water from a borehole so free.