We have lived in our lovely new house for exactly twelve months today. 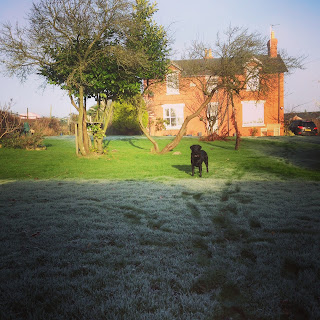 I am sorry to have been absent for so many months. I'm not even sure I can say quite what happened - it was most likely a combination of the utter frustration of not being able to put photos on, being super busy and just losing the plot a bit in the winter months.

Anyhow, I apologise if I gave anyone cause for concern. We are all fine, especially Jet who is still like a pig in clover! He cannot believe his luck, adopted from a second floor flat with working 'parents' to free range living with multiple furry, human and feathered friends to romp around with. As our house is the original farmhouse, it sits in the middle of a group of houses created mostly from the original farm buildings at the rear of our house. We therefore live in a cluster of five houses - four of which belong to members of the same family. Within this cluster are 32 bullocks, 5 horses, three sheep and a ram, 5 dogs (including Jet), about 8 cats and numerous ducks, chickens and cockerels - so Jet is never short of someone to play with. We too often have visits from his mates so it's all very friendly.

As you can imagine, a lot has happened in the last 8 months and I will try to update you on some of our progress in upcoming posts. In brief, the house has been completed re decorated, we now have a large polytunnel, the start of an orchard, the start of an outside veg plot, a new chicken enclosure and the house will be almost a third bigger than it was....not bad for a year's work!

We still have loads to do of course. The garden has had nothing done to it; we started an outside vegetable plot, but it's in a sorry state and needs lots of work before it can be truly productive; the building work is still ongoing and will be for some time to come yet and we have no shed so our tools are crammed in every nook and crevice. We have lost three chickens along the way, but recently gained an adorable Peking cockerel named Odin. He will eventually be big enough to keep order, but not big enough to 'do the business', which suits us. We haven't done anything about animals as we cannot agree on what the best plan is. Best not to rush in I feel.

Waking up here one year on, is still an absolute joy and I don't imagine it fading anytime soon.
Posted by Happeninguponhappiness at 07:22