Hooray! I have finally used up all of the produce from the broken down deep freeze in the shed. Hopefully at the weekend, we can take the deepfreeze and equally old fridge to the tip.

Along with the nine bottles of ketchup, 2 large kilner jars of blackberry vodka and 5 jars of raspberry and cassis jam from the other day; I now have 6 jars of apple and blackberry jam, 9 jars of gooseberry and elderflower jam (I added 8 tbsp elderflower cordial at the end of the cooking time), 9 jars of red fruits jam (plums, loganberries and raspberries), 5 jars of appleberry jam (apple, raspberry and loganberry) and 9 jars of spiced apple and tomato chutney. 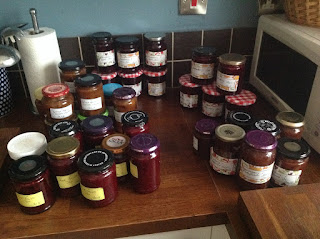 I'm not sure where I'm going to store it all, but no home produce has been wasted!

Cook all the ingredients together in a large pot over a lowish heat until the vegetables are thick, pulpy and soft and almost all of the vinegar has evaporated. Mine bubbled away happily on the stove for about 30 mins, stirred occasionally.
Decant into sterilised jars.

I have no jars left
I have no labels left
My feet and legs ache still, but I'm feeling rather pleased with myself :)