Thank you so much to everyone who commented on my last post about my aunt's house. Isn't it funny what piques people's interest? My aunt would no doubt find it very odd that we are all so enthusiastic about her home as to her it's just the way she has always lived. I was thinking about it the other day and remembered that my mother thought my aunt's house was awful - cold, cluttered and dingey with no modern amenities. Mum was always trying to persuade me that my aunt lived a fairly miserable existence, but my argument was that she was actually very contented with her simple life. I guess, Mum's life was never very simple so she failed to understand how anyone could be happy living that way - we are all different than goodness!

Jet had his operation on Thursday and we collected him from the vet on Friday evening. It all seems to have gone very well and he is being an excellent patient. We did borrow a cage in the end and he's been great about going in there. It means I don't have to worry if someone comes to the door (not that I ever have any visitors to speak of!). 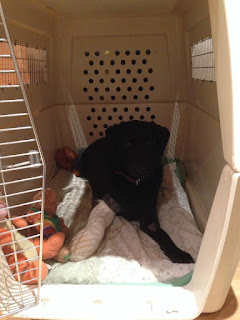 Taking him to the toilet is a right palava though. He has to have a plastic bag over his bandage, then be supported with a sling under his chest to help take the weight off his bad leg. He also needs to be on a lead to prevent any sudden movements. My garden is an absolute bog and incredibly muddy and slippery so we have had some close shaves. I wouldn't be surprised if I didn't end up in a caste as well at this rate! Hopefully he'll be able to have the bandaging removed after two weeks which will be one less thing. He's such a patient fellow though :) In the evenings when we are settled, we carry him into the lounge to have cuddles - that makes him very happy :) 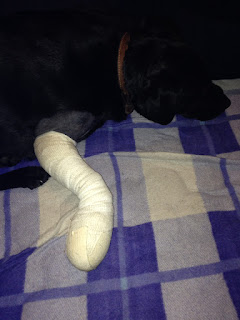 Being a black dog, it's hard to make him out, but you can see the extent of his 'club foot'! 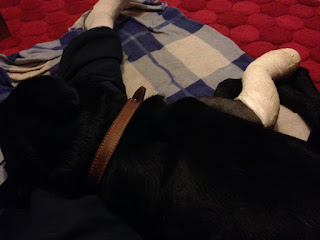