Not a straight line in sight! 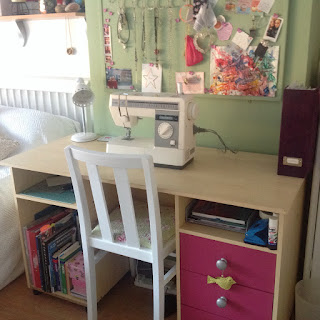 Daughter number two has gone off to Anerica for the year, so after giving her room a thorough clean, I moved in my sewing machine. It had been downstairs on the computer table, but there wasn't room or sufficient light, so I'm borrowing her room for a while. I have never been much good at sewing - I think my craft skills lie elsewhere! To be frank, my mother could barely sew a button on so wasn't the best example either. Undeterred, I decided I wanted to give it a go. I love patchwork, but quite sensibly realised that starting with a quilt was going to be beyond me, so my first project was a more realistic cushion cover.
After multiple false starts and a deepening sense of stupidity at my inability to understand the basic principle of placing the squares right side together before sewing, I managed a very higgeldy piggeldy first attempt. I don't think that any of the seams meet up properly and the border is slightly skewiff but I like it all the more because of that - it's jolly, imperfect and handmade by me. 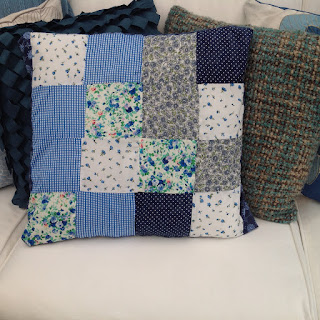 Many moons ago I bought a wicker chair from a certain Swedish superstore to go in one of the bedrooms. It has then been moved from pillar to post before ending up in the conservatory. With two settees and two armchairs in there already it was somewhat unnecessary. Daughter number two had requested a very striking cushion for her birthday, but it needed a neutral backdrop, so the chair had a spray paint makeover and is now residing in my new sewing room. 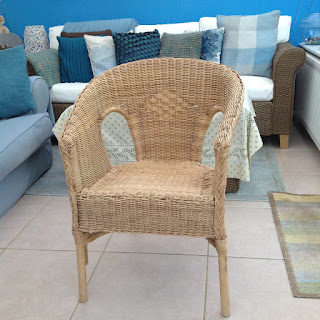 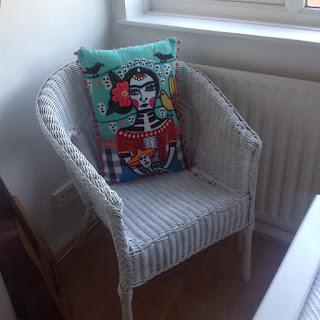 After in its new little space in the corner. The cushion is designed by Ian Snow, in a style similar to that of the artist Frida Kahlo.