Sorry, I've been 'out of action' for a while. Mr D and I went down to Mums to do a final clear out and despite me requesting her Internet provider to keep the house supplied, they obviously hadn't so I wasn't able to post. I'll also have a lot of catching up to do now on everything that everyone else has been up to!
I'll post more about the visit to Devon in a few days, but meanwhile here are some pictures of my refurbished cloakroom, completed just hours before we left for Devon.
We're off to the Isle of White at the end of the week too, so I might be a bit intermittent for this week.

The bathroom in this house used to be at the top of the stairs, but over the years, with remodelling, the main bathroom is now downstairs and upstairs there is a small ensuite and a separate cloakroom. It was looking a bit tired so, partly as part of my general preparations for our next plan and partly just because, I decided to tart it up a bit.
The woodwork got a fresh lick of satinwood, the walls and ceiling were freshened up with matte white and the bathroom cabinet was given a facelift. 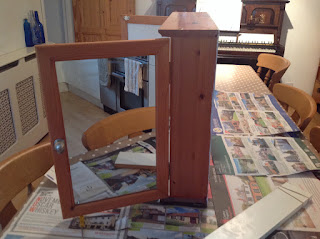 It had been orange pine which wasn't looking so good in the bright white room! I painted the whole thing white, then put a duck egg blue in the door recesses and stuck a backdrop of a rather cheerful Japanese paper on the inside. I also replaced the door knobs with porcelain ones with a little floral motif. I'm rather pleased with the overall effect. It certainly looks more cheerful than the dreary orange pine did! 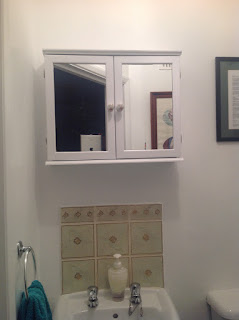 I'm not a fan of those tiles, but replacing them was a whole other ballgame, so they have to stay for the time being! 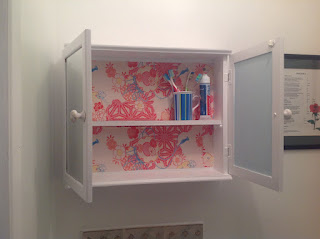 I don't know about you, but I find that the pull chords for bathroom lights rapidly look grubby. I had tried to clean ours up to no avail. Obviously I could have easily gone out and bought some new chord, but I decided instead to thread it with brightly coloured wooden beads. They will be much easier to wipe down. 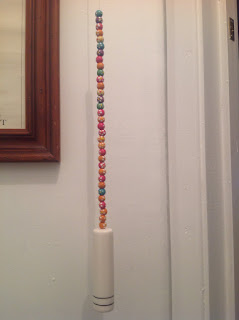 The whole revamp cost me absolutely nothing because I had paint, paper, doorknobs and beads - even better!
Back soon :)
Posted by Happeninguponhappiness at 16:39