I have a repertoire of soups that I make quite regularly, but the other day I fancied a change. Generally I liquidise the soups, but I do also like chunks of veg so this appealed. 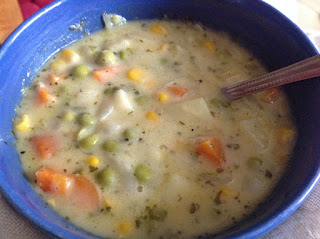 Cook the diced veg in a large pan, just covered in vegetable stock, until they are tender. Meanwhile, in a small pan, melt the butter, add the flour and stir. After about 1 min, slowly whisk in the milk until you have a thick 'sauce'. If you are using cheese, add to the pan and stir until melted. Mix this white sauce into the vegetables and stock and warm though. If it's too thick, just add a little extra water. Adjust the seasoning if necessary. I don't add salt because I used a stock cube. Obviously, you could add any vegetables you like or have to hand. I guess you could also stir in some chopped ham or chicken.
I did add cheese to mine but only a little extra strong cheddar - a little goes a long way when you get the punchy stuff!

On a completely separate note .... I was totally insensed yesterday. As you'll know, we had a small car accident a few weeks ago - completely not our fault and the other side has accepted liability. The car was written off. We have received money for the car, under the market value but marginally better than we had thought we'd get, but then they take off the excess - £210. I paid for the car insurance for the year back on 6 September and when I had called the insurance company last week, I had been told not to worry cancelling because it would be done automatically when the car was scrapped. I presumed therefore I would get around £400 refund on the insurance....no, not a bloody penny of my premium comes back to me because the car was written off. What the heck is that all about?!!!? I was so mad I had to hang up before I completely lost the plot. I haven't given up in arguing the point or finding some way to get all of the money back because I DO NOT see why I should be left out of pocket. I fail to see how they can argue why I shouldn't get a refund. What are they using my insurance money for? If anyone can enlighten me, I'd be very grateful.

Still, at least I'm getting long awaited physio on my neck and back this morning, so I should feel better about that at least :)