I feel as if I'm on an uphill struggle presently - I start a job, only to find it then creates multiple others! Still, I am making some progress even if I'm at the 'worse before it gets better' stage ....

I decided to start on one of the bedrooms which isn't presently in use. Daughter number two who is in America, has the front double bedroom. Originally it was the main bedroom, but when we built the extension about 16 years ago, we extended the second double bedroom at the back, so that became ours. 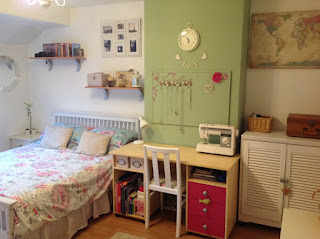 This is the room now. It's a pretty, light filled room. I don't think it needs anything else doing.

I bought a valance to cover the underbed storage items, but her bed has legs and a slat which runs head to toe, so I had to cut the valance three times to hang around the 'obstacles'. I thought I'd just quickly run up the seams on my machine, but there is obviously an issue with the bobbin and it kept jamming, so I gave up and hand sewed them. 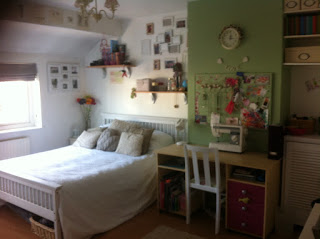 Blurry photo, snapped quickly on my phone. There's not a huge difference, but I have packed away all her decorative items and thinned out the frames on the wall. I had covered the bed with a large throw brought back from a mums to keep the cats off the bedding, but it was really a kingsize throw and didn't cover the end of the bed. You can just glimpse the shelves in the right hand corner. All the books have been boxed up. At least it will be less to do at a later stage.

I then decided it would be a good idea to remove the shelves from the alcove. They weren't great shelves as I'd made them myself, BUT of course, when I started to take them off, half the wall came with them! I spent the afternoon filling the holes and repainting. It's not perfect, but I hunted round for a large picture and once hung, it covers most of the lumps and bumps!

One bedroom down - only another four to go :(
Posted by Happeninguponhappiness at 17:08