We have some seriously soppy pets! Yesterday morning, I got out of bed to do the animal rounds and before I could blink, in to my place hopped one black cat. He made himself extremely comfortable and stayed there most of the day! 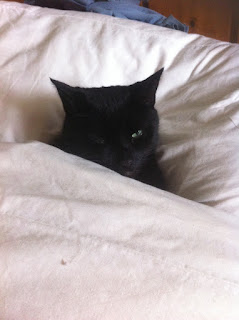 I have to admit I was rather envious :)

Jet has always had a fear of the Hoover and the lawnmower. He copes with the steamer and other noisy machines like my sander etc, but he's developed a new more extreme fear since his operation.

Every now and again, he will start to get really agitated, shaking, whining and being very clingy. Because he had had a major op, we presumed he was in pain, so had been giving him painkillers. Then we realised that he was still doing it despite the painkillers. After a process of elimination, we have come to the conclusion he has a pathological terror of the dishwasher! Every time I turn it on, he starts. It's a Bosch and very quiet for a dishwasher actually, but he can't cope with it! Seriously?! He's a big girl's blouse :) 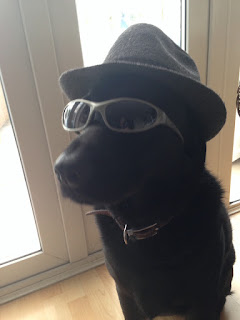 Trying to be all gangster, but underneath is a heart of jelly!