A new addition to the family

We have been thinking about getting a dog for ages. Before we had the children, we bought a Golden Retriever called Woody. He was the best dog - loving, well behaved and fabulous with the children and all the other animals that we introduced along the way. Woody was an integral part of our family for nearly 16 years and it was crippling when he finally became too ill. For quite some time none of us could face another dog and then I went back to work so cats seemed a better bet as they are so much more independent. When I stopped working, we started talking about dogs again, but couldn't agree. Mr D wanted a puppy, I wanted a smaller dog and a rescue dog, my son wants a husky (!!) and so on and so on ..... The discussion would happen, none of us could agree, so it was put on the back burner again.

However, an opportunity has arisen and so we have adopted a black labrador. His name is presently Jet although that may change, he is 2 years old and his owner is working full time and cannot give him the attention he needs. She has therefore made the tough, but brave decision to put him up for adoption to a home where someone is around during the day. He came on a day visit on Sunday - I wanted to see how he was with the chickens before making a decision. He was calm, friendly, good with other dogs, fairly disinterested in the chickens (they were thinking, jeez foxes are sure getting big these days!). The cats were disgusted with us, but they can fend for themselves and I'm sure they will find a way to let him know that they were there first! He's a bit porky, so will be put on a diet and gentle exercise routine to get him back into shape, but I get the feeling he will settle in just fine.
When we move to our bigger house in the country, we will look at having a second dog, probably a puppy and Jet can teach him the ropes! 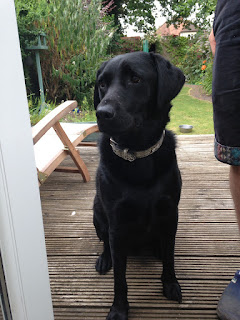