I've been spending some 'unplugged' time this weekend. I find myself trawling through the Internet too often if I'm on my iPad, so I've not even brought it downstairs until much later in the day. Consequently I've been outside a lot more and felt more peaceful. I think I will try to limit the time I have phone/iPad/TV more and more - it's too easy to stupify in front of screens and before I know it, I've wasted an hour or more achieving nothing! 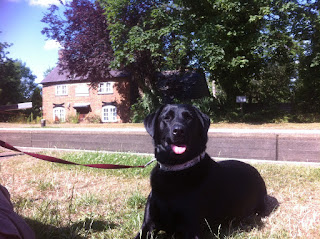 You'll be pleased to here that Jet is an absolute treasure :) he's been so well behaved and calm and he seems to be very happy here. Our only concern is that he is limping a bit. I think a) he has a pre existing injury to his right shoulder (apparently he fell off the settee as a puppy), b) he is overweight and c) he is unfit and not used to the amount of exercise he is now getting! He had some fantastic walks along the canal at the weekend and was running all over the place like a puppy, but then  became very stiff later in the day. I've given him a very gentle, shorter walk this morning and will do the same again this afternoon just to give him a rest day and we will start him in some anti-inflammatories too to ease the stiffness. He doesn't seem to be in pain which is a good thing. Getting anything done around the house isn't easy as he is constantly by my side, but I have managed to get him to stay downstairs so the cats can have the freedom and peace of upstairs. They are distinctly unimpressed with his arrival!! 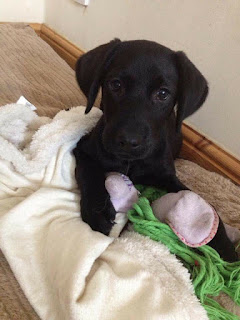 I harvested the last of the loganberries (5 kilo in all from 3 plants!) and broad beans at the weekend and picked the first pattypan squash - they are very cute! I'm going to google some recipe ideas as I haven't cooked them before. Do any of you use them? 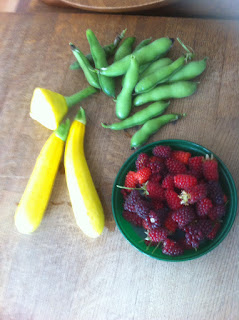 Sorry - blurry photo!
I made a start on a new craft project this weekend too, which I'm very excited about. I will of course write a post about it when I've finished, but here is a teaser..... 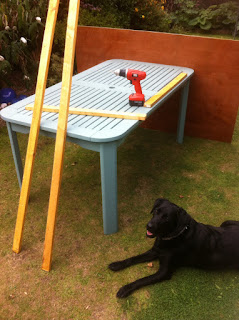 My ever present helper!
This is an idea which has been in my head since I went to Barcelona for my 40th eight years ago!! I'm hoping it will finally reach fruitition now!! 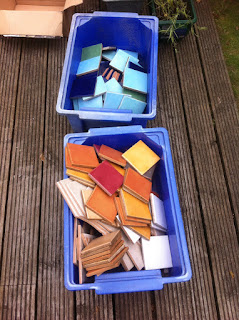 Mr D starts his summer holidays tomorrow. He is much in need of a break, so we are hoping to be out on lots of dog walks if the weather stays as good as it has been!
Posted by Happeninguponhappiness at 14:47