To be fair, I had never heard of apple butter before, but when reading a vegan's blog (sorry can't remember which one, but it may have been 'oh she glows'?) , I came across this little wonder. Being that it combines two of my favourite things - stewed apples and cinnamon, I felt duty bound to give it a go. 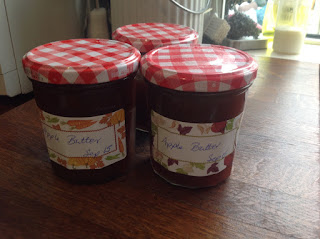 Peel, core and chop about 3lb apples (I used eaters off the tree, but you could used cooking apples and add a touch more sugar)
Put these in a slow cooker set to high.
Combine 2 cups of sugar (or less if you prefer and depending on the natural sweetness of the apples) with 2 tsp ground cinnamon and 1 tsp mixed spice. Some recipes also add salt and ground cloves! But I chose to keep it simple. Stir into the apples in the slow cooker.
Cook on high for 1 hour, then reduce the heat to Low and cook for a further 9 to 11 hours. (I did mine overnight) It's ready when dark brown and if you pop a tsp of it on a plate in the fridge, it will hold its own shape once cooled.
Decant into sterilised jars and keep as for jam, storing in the fridge once opened.
As you can see, 3lb of apples reduces to a mere 2 and 3/4 jars of Apple butter. 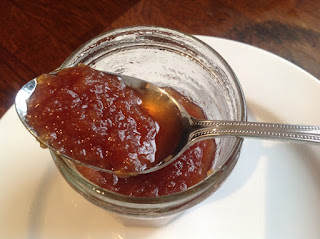 I've just tried a spoonful - delicious and very autumnal. Would be lovely in porridge, rice pudding, stirred into yoghurt on pancakes, waffles or toasted tea cakes, plain toast....... It would probably be nice with a ploughmans too or perhaps with a curry?

Of course, it's naturally gluten free, vegan and the simplest, hands off recipe ever. I shall certainly be making more of this.

Yesterday, I made what I have, somewhat pompously called 'Hedgerow Jam'. It's basically blackberries with some other random mixed berries I had lurking in the deep freeze. I added liquid pectin, but it still took ages to set and has remained a soft set. However, it tastes great. For this, I used the last blackberries I picked which were softer so I had already stewed them with no sugar in readiness for jam making. All the other blackberries I froze on a tray before tipping into bags, so they can be dipped into for crumbles, cakes and cheesecakes. 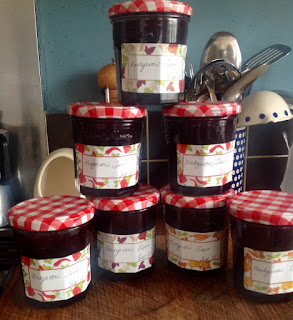